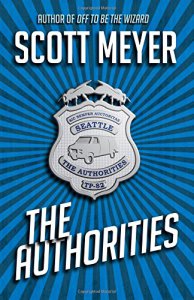 (Originally posted on Geeks and Geeklets)

Kid Friendly Rating: 12+ The book opens with a non-sexual scene involving an adult toy, but it is mostly PG-PG-13 on balance. Contains some violence, mostly in the form of suspects resisting arrest.

Synopsis: Sinclair Rutherford is a fastidious young officer in the Seattle police department. His brown-nosing and generally over-eager manner have made him the subject of scorn and ridicule among senior members of the force. After a high-profile arrest involving an inappropriate object lands Rutherford in his Captain’s doghouse, Rutherford is recruited for a dream job by a local billionaire assembling his own crack team of crime-solving experts.

Over the course of his first investigation with his new team, Rutherford finds himself in a series of varying levels of uncomfortable situations. Rutherford does his best to save his dignity while finding his footing with his new team and following leads on a notorious murder case.

Scott Meyer is quickly becoming one of my favorite comical fiction writers. For information on a few of his other works, you can check out my review of his hilarious Master of Formalities , or Sarindre’s review of the equally funny and creative Off to be the Wizard (book 1 of an entertaining ongoing series).

If the cover of this book evokes the classic crest of the old TV show and 1987’s movie Dragnet, it’s probably not by accident.

While this book is not so much a “buddy cup” comedy, it definitely draws a lot of comedic value from the fish-out-of-water scenario presented by an officer suddenly forced to work very closely with partners who have personalities and talents extremely at odds with his own. Side note: if you somehow missed the  movie Dragnet, starring a young Tom Hanks and Dan Aykroyd, it’s a great “bad-80’s-movie.”

Getting back to Rutherford, it’s a fun read, watching Rutherford grow within his own team, even as his frustration at his position mounts. His team has a, let’s say “unique,” set of abilities that both add to the comedy, while also serving to drive the story forward, including a keeper of trained bees, an ex-Dutch special agent, and a mysterious ninja.

If you’re a fan of Meyer’s other work, or of cop comedies like Dragnet, Starsky, and Hutch, Tango and Cash, Beverly Hills Cop, and so on, this book may be worth your time. I give it 3.5/5 stars!