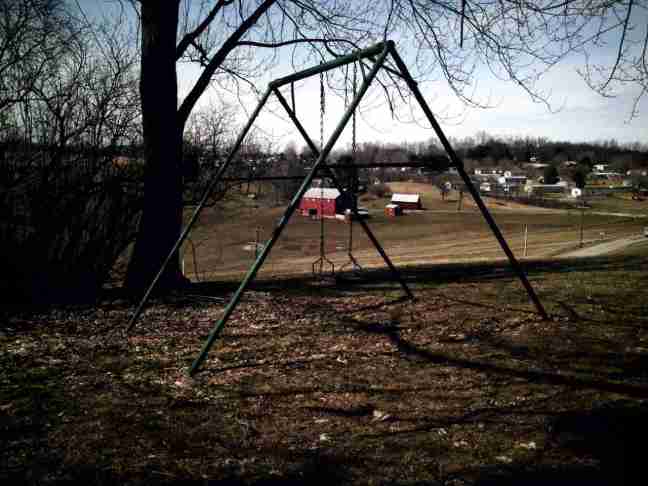 This story was an assignment in my Southern Writers English course at Westminster College. It was a two-part assignment. Part one was to carry a camera around with me and try my hand at taking pretty photos. Behold the spectacular quality of my camera and camerawork below. Anyway, part two was to find inspiration from one of my pictures and create a short story to go with it. Here it is.

That swing still has an aura, even after thirty years. Real or imagined, everything just seems… lighter when I’m there. To you it may be just some broken down old swing, but to me, that swing is the beginning and the end of the world.

At first it was just my swing. Dad built it for me himself, so I could play and watch for him to come home from a long day of work at the farm. He was a teacher, but he took care of the farm in the summer. He said working hard all year kept him young. I just loved sitting there in the shade by myself, swinging lazily as the cows slowly moved and laid down in the sun. Sometimes I’d watch with jealousy as they waded into the pond to cool off in the muggy heat of a Western Pennsylvania August.

Even then, I knew I was lucky. Most kids had to wait all day for their fathers to come home from work, exhausted from another day at the Mill, or drained from the toils of the office. I got to see my dad all day in the summer, as he painted a new coat of deep red on the barn, or drove the tractor back and forth through the fields, cutting down row after row of hay. Every time I saw his blue ’57 Chevy rolling back down the road, I rushed inside. He must have been so tired in the evenings, but he never failed to give me a big smile and hold me on his knee. “How was your day, Maggie?” he’d ask, knowing full well that I’d been on the swing watching the farm since he’d been gone.

When my little brother was born, I was afraid to lose this attention. I didn’t hide it very well either. When Mom told me she was pregnant, I tearfully ran straight to my room and threw my head under my heavy down pillow. Mom lifted the pillow from my head and looked knowingly at me with her deep brown eyes. “You know, Maggie, it’s going to be just like having a new friend who looks up to you.”

“It’s gonna take all your attention,” I said.

“Don’t be silly, Maggie. We’ll love you every bit as much when she gets here. Look at it this way: you’ll have someone to play with all the time when I’m busy, and you’ll get to hold her, and look after her, and she’s going to look up to you for advice.” At this I smiled. Maybe it wouldn’t be so bad to be an older sister after all.

As it turned out, Mom had a boy. They named him Kevin. True to Mom’s word, I got to hold and try to feed Kevin when he was just a cute little baby. As he started to get older we became nearly inseparable. In the winter we’d walk past the swing with our wooden toboggan on the way to the steep hill of the farm across the street. Usually I pushed, jumping on the back just in time, as snow flew by us in the wind. Occasionally, Kevin asked me to ride in the front, because it was “so much faster with me weighing down the front of the sled.” I punched him in the arm but complied, knowing he meant nothing by it.

In the summer, we both went out to the old swing to watch Dad work; picking corn, or mucking out the wagon that the cows ate hay from in the winter months. I tried to tell Kevin about the world, me at the wise old age of 12, while Kevin asked me again and again to push him higher.

“I wanna touch the sky,” he’d say, short blonde hair blowing in the wind. “Don’cha wish you could fly?”

Ignoring his question, I chose to impart some recently learned wisdom. “When you get to sixth grade, things are different. Boys and girls hafta sit at different sides of the table.”

“Mom and dad don’t sit at different sides of the table.”

“Oh.” He looked out at the farm with Dad’s piercing blue eyes, working it over in his head. “Things must get confusing when you’re older.”

“Yep, but that’s why you have me to look after you.” Dad was coming home now, so I gave him one giant push. I had to dive out of the way at the last second to avoid a swing in the face. Kevin jumped off and we both lay on the ground, giggling and holding our sides as if they were about to burst open.

I wish that summer could have lasted forever. He never lived through another.

That fall, Kevin began to get weak. One night in October, Mom and Dad watched him nervously as he pushed away another plate of food. Having barely taken three bites, Kevin pronounced himself full.

“Honey, you have to eat. You’re never going to feel stronger if you don’t. Food gives you energy,” Mom insisted.

“I don’t feel good, mom. I was hungry earlier, but I can’t eat anymore,” Kevin replied.

Mom frowned at Dad. They got up from the table and went into the next room. We could hear their muffled voices.

“What do you think they’re talking about in there?” He asked.

“Probably how you’re being such a pain in the butt, complaining all the time when you won’t even eat.”

“Tell you what. If you take two more bites, I’ll throw the rest away and tell Mom and Dad that you finished and went to bed.”

He walked out just as Mom and Dad came back into the kitchen. Mom looked like she was crying. Dad looked flushed. Both of them looked relieved when I told them Kevin finished before he went to sleep.

Two weeks later, Kevin and I were in the back seat of Dad’s Chevrolet, while Mom and Dad rode silently up front. Normally our car rides were fun. We played “I Spy,” and “Categories,” laughing and arguing about the validity of each other’s contributions. This ride was silent, morbid. Dad clutched the wheel tightly and stared at the road while Mom watched him, occasionally glancing back at Kevin, who sat diagonal from her.

Kevin’s pallor had visibly whitened in the past month, though it was hard to tell because everyone was losing their tans. He stared out the window as we passed new churches and houses; they were springing up where there had only been trees before.

“Where are we going, again?” I asked. I had a short attention span.

Exasperated, Mom sighed. “To Dr. Baker’s office. He wants to take a look at Kevin.”

Five minutes later, we were there. Dr. Baker’s office was an addition to the Baker family home. His three-story house had white siding and a wrap-around porch. Directly in front of the stoop, a heavy wooden door led into the house. We walked past it to the opposite side of the porch and opened a white door with a square window.

Dr. Baker sat inside, waiting for us. He was a tall, thin man with a bushy, white mustache that nearly covered his mouth. The mustache gave his face a sad look that belied his generally jovial manner. Kevin was directed to a wooden table with an afghan laid across it. After a series of tests that I didn’t really understand, Dr. Baker very seriously asked Kevin and I to wait inside the house while he talked to Mom and Dad.

When the three of them joined us in the house, Mom was crying. Dad, who never cries, looked on the verge of tears, and Dr. Baker looked sadder than ever. Dad and Dr. Baker sat down on a plaid couch opposite us, while Mom sat next to Kevin with her arm around his shoulders. Dr. Baker began to explain to Kevin that he had Leukemia.

Kevin took it all in like a champion. He looked very scared in Dr. Baker’s house, and continued to for some time afterward, but I never saw him cry. At the time, I thought he didn’t understand. In fact, I don’t think he ever understood; not the way Mom and Dad and I comprehended the situation. On the other hand, maybe it is more appropriate to say that we never knew what was going on the way that Kevin understood.

In the next few months, Kevin became increasingly bed-ridden. Mom and Dad stopped sending him to school after Christmas break, afraid that he might catch something and become even more ill. I knew he was lonely, so I picked out books at school that I thought he’d like and brought them home to read to him. His favorite was the Hobbit. “Will you read it to me again?” He asked me once in February.

“Just read me the part where Bilbo flies with the eagles. That’s all I want to hear.”

I think he loved the idea of such a grand adventure, especially as it now juxtaposed with his condition. So, I read him the chapter. I would have read the whole story for him if he’d only persisted.

He lasted through Easter, although he wasn’t feeling well enough to go to church. One day that spring, when the sun was shining through his window onto his face, I walked into his room to see him looking brighter than normal. His eyes had regained some of their knife-like intensity, and blood that was absent from his face for months seemed to have returned. He hadn’t been outside in 3 months, but he turned to look at me and said simply, “Let’s go out to the swing.”

After bundling him up in a blanket, I helped him outside, doing most of the work. He sat down on the swing, and I pushed him silently as he stared up at the sky.

“I wonder what the clouds feel like. Do you think I’ll ever get to feel them?”

I was crying now, but I tried to stabilize my voice long enough to answer. “I’m sure you will, Kev, up in heaven… clouds will be everywhere.”

Kevin answered in a faraway sort of voice. “I feel like God is watching me, up here, with you… I know I’ll be gone soon, but when I think of flying up high, with God and Grandma, and Grandpa, I’m not afraid anymore.” He turned and smiled at me, and I couldn’t hide my tears. “How about one great big push, Mags? I want to touch the sky.”

Kevin passed out of our lives two weeks later. It is so strange now when I look back to that afternoon. All those summer days, I thought I was teaching Kevin the lessons he would need in life. In the end, he taught me something far greater.

Even now, thirty years later, that swing holds the same vibrancy; luminous with memories. And when I sit down in that chipped, green seat I think of God, and that soaring spirit that Kevin never really let die.