(Originally posted on Geeks and Geeklets)

TLDR: Watch for irony only.

Kid Friendly Rating: 14+. The movie features a violent earthquake and all of the associated blood, death, and otherwise scary scenarios. Click here for the Parent Rating Guide!

In the latest mega-budget apocalyptic movie, a massive earthquake has struck the San Andreas fault and laid waste to California from San Francisco to Las Angeles. Will The Rock save his marriage, his daughter, and the WORLD? Can you smell-el-el-el-el-el what The Rock is cooking? 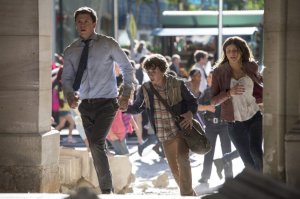 Brad Peyton is the latest in a long line of directors to bring your real-world worldwide disaster fears to the big screen. These types of movies have a checkered past. From the historically-based (A Perfect Storm, Apollo 13, The Impossible) to the freaking crazy (2012, The Core, The Day After Tomorrow) to the vaguely plausible (Twister, Armageddon… everyone knows roughnecks make the best astronauts, Independence Day …we all agree aliens are real and will attack us, right?), these movies range from great to historically bad.

Fortunately, the viewer usually does not have to be terribly discerning to separate the decent movies from the utter, complete crap. Aaron Eckhardt was great in Thank You for Smoking and The Dark Knight, so The Core must be pretty good, right? No? Crud. Well, all children of the 80’s know John Cusack does great movies, so 2012 was a can’t-miss. Right? Foiled again!

Fortunately, patient reader, you have knauff13 to guide you through this minefield of turds.

Might as well start with the director who guided this slag heap through the finish line. Brad Peyton was the obvious choice for a big-budget action thriller, based on his overwhelming success with such vaunted flicks as, um, Journey 2: The Mysterious Island (2012), and Cats & Dogs: The Revenge of Kitty Galore (2010). Not a joke. I could probably stop right there. Seriously, everyone, someone in Hollywood is making these spending decisions. Why can’t it be you, instead? It’s hard to really tell whether the story faltered by Peyton’s ham-handed touch, or at the direction of an unforgiveable script, but either way. This is the man that put it all together for ya.

***Spoiler Alert*** I especially liked the part at the end, where a gigantic American flag materializes and gets unfurled above San Francisco in a shameless attempt to manipulate American pride in place of quality storytelling. Peyton, however, decided the viewers might not quite get the symbolism and decided to smash them across the face with it once more, as Carla Gugino asks The Rock, “What will we do now?” The Rock gazes across a ravaged landscape and solemnly intones, “Now, we rebuild.” HA! The Rock will fix everything! USA! USA!

Dwayne Johnson (I’ll give him the benefit of his chosen moniker from here out because I don’t actually dislike him) is mostly likeable as a leading man, but placing him in a role requiring some dramatic range does expose his limitations. I think somewhere in his stoic demeanor, I was supposed to detect hints of alarm for a daughter in grave danger, sadness over a long-deceased second child, and wistful regret over a marriage that failed in the wake of said lost child. Did I say Johnson is good at being stoic? The scenes requiring Johnson to act the conquering hero were believable, occasionally, but if the viewer wants any sign of emotion from a father in extreme distress, it’s not here.

And, last, but not least, I would be remiss if I didn’t point out this movie’s painful objectification of women. Look, I know it happens, even sometimes subconsciously, but this is bad even by Hollywood’s low standards. Within the first few frames of the movie, we see Alexandra Daddario in a bikini, for absolutely no narrative reason whatsoever. Later, as Daddario and her companions fight their way through the wreckage of San Francisco she literally strips off her clothing to fight through the earthquakes. Not making that up. Look at the pictures above for the before and after. The kid has managed to keep his jacket AND shoulder bag. The young man’s shirt has come untucked to show that he’s been through a scuffle. Daddario has lost two different tops in the same time. Weird. It really is a shame, because Daddario’s character is written as a remarkably savvy survivor who often puts her fellow male companions to shame.

I like Carla Gugino as an actress a lot. She’s better than this movie allows. That being said, there is a scene involving Gugino as the lone survivor of a collapsing building. She scrabbles madly and across shifting concrete and girders, finally jumping to her safety in a helicopter. In HEELS! Why??

All told, if you’re looking for a big blockbuster-type movie, you can do far better. Go rent The Martian instead.