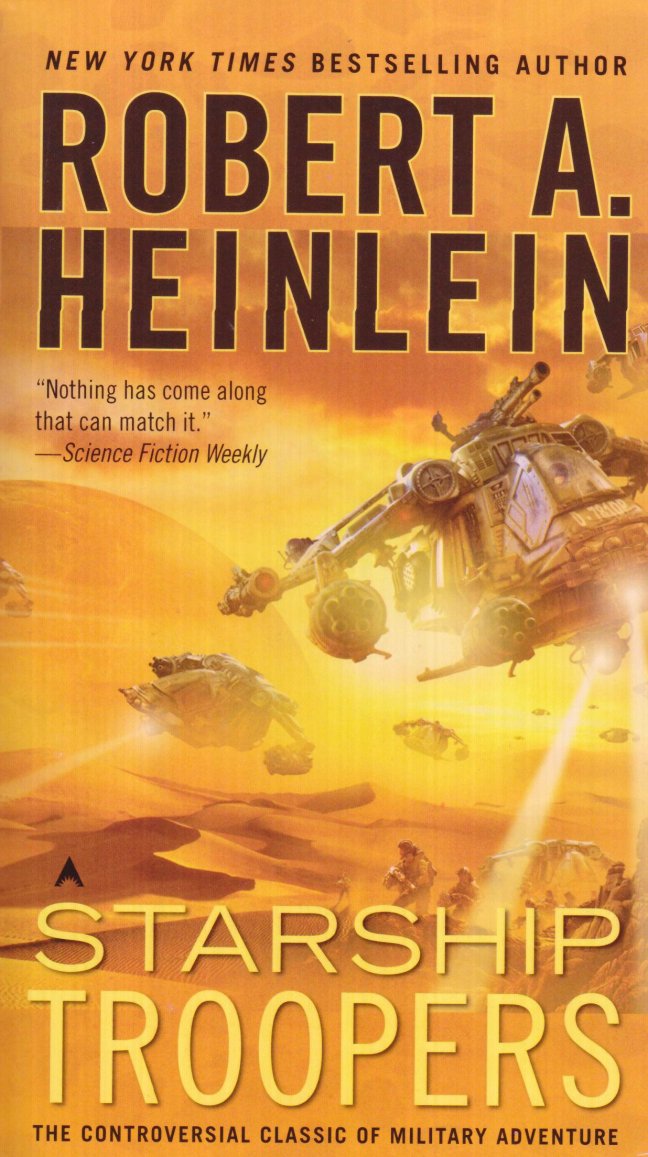 Originally posted on Geeks and Geeklets

Kid Friendly Rating: 13+ The inner workings of outer space warfare might be a little advanced for younger readers, but Heinlein goes easy on the gory details.

In a flimsily-justified effort to “be his own man,” Juan “Johnnie” Rico turns his back on his father’s successful business and joins the Federation military for a contractual two-year term of service. However, as tensions mount between the Federation and the “Bug” species, Rico finds himself drawn further into military life than he ever intended.

Most people today are probably more familiar with the 1997 movie of the same name… Oh, god. I’ve just had a thought. That was almost 20 years ago. Are you younger Millennials out there even aware of this movie? That is depressing.

Anyway, it was a movie directed by Paul Verhoeven (Total Recall, Robocop, Basic Instinct), starring Casper Van Dien, Denise Richards, Dina Meyer, and Neil Patrick Harris. I saw it in theaters at an outrageously inappropriate 11 years old, and it was completely full of swearing, blood, violence, and nudity. It was incredible.

Fast-forward 19 years, and I still remember it fondly, although I do respect that it is not the masterpiece of modern cinema that I once believed. It’s got sort of a small cult status now. I see memes and gifs pop up periodically, ironically or not.

In the interest of rounding out this review, I watched the movie again this week, and I did not feel let down. Possibly the single most remarkable thing about this movie, nearly twenty years on, is that the special effects actually hold up pretty well. Many sci-fi movies from the 90’s are burdened by an over-reliance on under-developed CGI effects, but this movie, either through the use of scale models and animatronics, clever lighting, or just well-thought-out usage of CGI, has largely managed to avoid that.

This is not to say you’ll think you’re watching a movie that was released yesterday. Scene transitions and some effects, particularly those used for outer space scenes, do show a bit of their age. I’d put the effects about on par with a well-produced HBO show, like Game of Thrones.

This should also go without saying, but please don’t go into this movie expecting an Oscar winner. This is a fun sci-fi action movie. Full stop. It does have a little tongue-in-cheek social and political commentary to class up the place, but the thrust of the movie is Man vs. Bug. If you can get behind that, you’re in.

If I were to register a single complaint, it would be, man, Casper Van Dien was the best they could come up with for Johnnie Rico? His acting is a little, ah, wooden. To be completely fair to Van Dien, I think the script somewhat calls for it. Johnnie Rico is a painfully earnest and rah-rah character, very much in the vein of Chris Evans’ Captain America. And boy, Van Dien sure is purdy to look at.

Now, as for the book. I did not know this book existed until a few years ago, and even after learning about it, I was not especially interested. I liked the movie. Why should I need to re-hash it in literary form? I could just watch the movie that I like again. Well, much like the lark that took Rico into military service, I finally gave it a shot, and found a surprising number of differences.

The movie was not a standard book-to-script adaptation. The love triangle between Rico, Carmen, and Dizzy which provides the narrative thrust of the movie is really nowhere to be found. Carmen exists, but only as a distant friend rather than a love interest, and Dizzy is merely a fellow male boot camp cadet who plays a minuscule role.

The movie is largely an action movie split between the perspectives of Rico and Carmen, but the book is entirely Rico’s first person narrative, and combat scenes, while present, account for a very small percentage of the book. Much of the novel focuses on Rico’s various experiences in boot camp and beyond that serve to shape him into the person and soldier he will become. The novel really doesn’t read like an action story, or even a largely sci-fi story, despite the exotic settings. With the detailed descriptions of boot camp proceedings and how infantry rankings are assigned either by recommendation, officer training, and necessity in the field, it reads almost like a real historical war account.

The book manages to be remarkably prescient for a book authored in 1959, although it is also a book of its times. One of the most strikingly dated things about the book is the treatment of female characters, along with Rico’s general viewpoints on women. Heinlein manages to be both forward-looking and endearingly chivalrous. On one hand, he has placed the majority of the female characters in his book in leadership roles within the military. By Rico’s words, women have faster reflexes and reaction times, and their superior scores in math make them prime candidates for space naval pilot and officer positions. On the other hand, Heinlein did not write a single female character placed in the Mobile Infantry, the implication being that it is the job of strong men to stand on the front lines and sacrifice themselves to protect the women. It’s sort of a dichotomy, right? Of course, one could also argue that Rico made it clear that the M.I. was his absolute last choice for military assignments, so if there were no women there, perhaps it was because they simply scored out of it.

The film treated men and women soldiers as equals without fanfare or commentary, both in the navy and within the mobile infantry, although it should be said that the majority of M.I. troopers remained men. One thing even more interesting to me about the book’s gender setup is another sharp departure from the movie. In the book, the M.I. enters combat zones within fully equipped power armor, which more or less renders the wearer’s physical strength moot (although it is reinforced several times that a soldier who is compromised physically through sickness or weariness is of no use to his fellow soldiers, power armor or not). It is interesting that even though this power armor should have theoretically leveled the playing field for all body types, the film’s depiction of lightly armored traditional ground troopers had far more diversity.

The book also seems a bit dated in its conception of soldier motivation, as Rico at one point opines that there is no greater motivation for a group of M.I.s than knowing that on every combat drop, a ship full of women is waiting behind, both depending on them and watching their backs. The idea of a female M.I., or even an M.I. who is not particularly interested in the affections of a woman, is really not even contemplated.

But, when I read a book from another time period, I believe that it is healthier to both a) accept that the book exists as a manifestation of the time period in which it was written, and b) the author’s view points are not my own, and that is OK. I understand that this particular book was controversial even when it was released for some social ideas suggested throughout the narrative, including military sovereignty in government and the nobility self-sacrifice for the betterment of society. I take these ideas as the suggestions of the characters in the book, nothing more.

In other small negatives, some readers may turned off by relatively dry passages explaining the complexities of Federation military organization and the operation of the M.I. power armor. I personally found the military rankings a bit dense hard to follow, and I consider myself somewhat interested in the subject (although I am also fairly unschooled in general real-world military rankings and procedures).

In sum, I think this was a really interesting read. I give it 4/5 stars!

Have you read this book? Let me know what you think!